My previous time on Hunt Lake trail did not go well due to physical and mental overexertion. I had two anxiety attacks that resulted in me ripping my backpack off in the middle of the backcountry and hyperventilating. It was terrifying.

My friend joined me for her first time on Hunt Lake and I took care unfinished business. We spent nine hours on the trail. 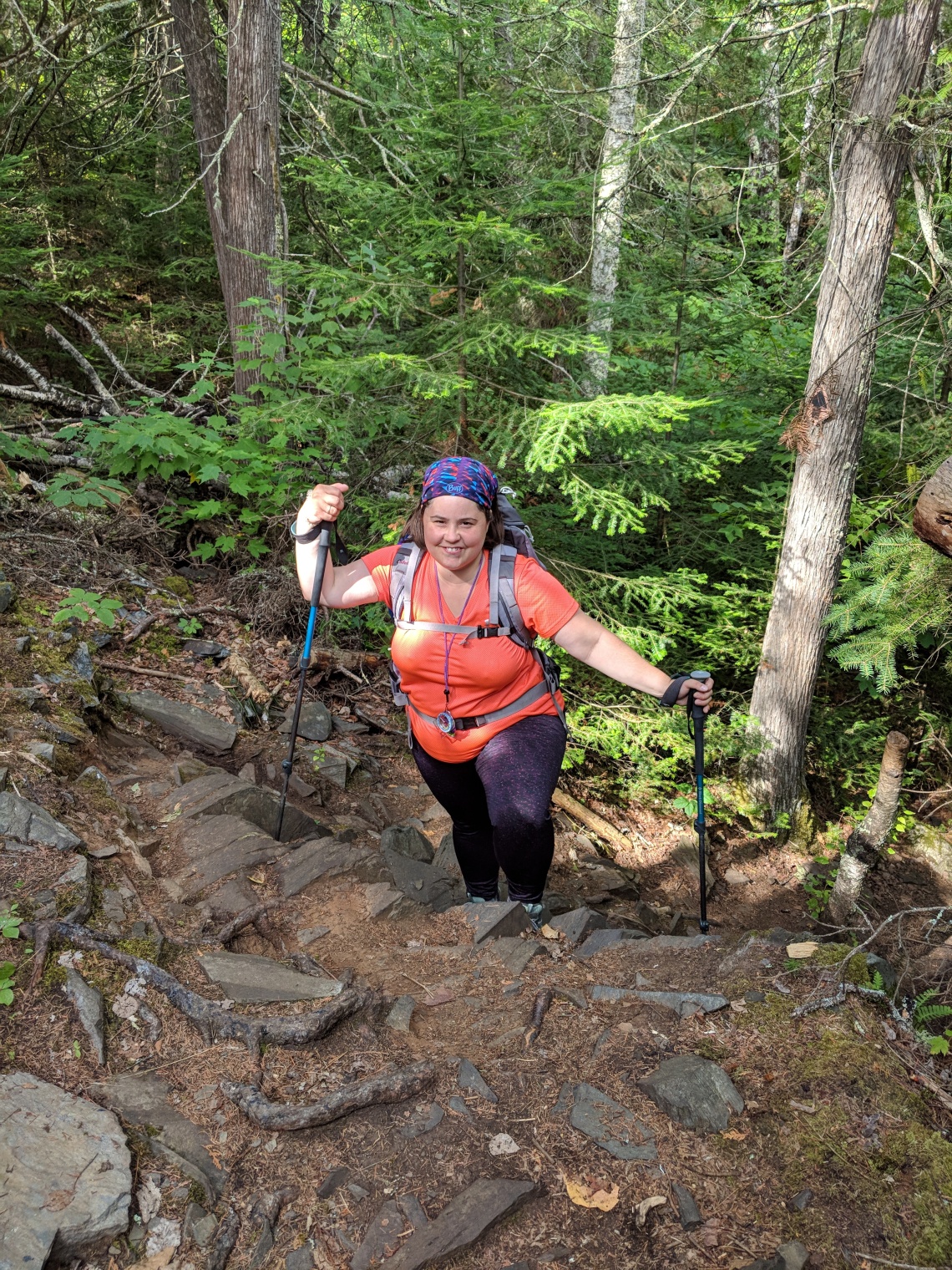 Nine glorious hours! Well, the last little while wasn’t so glorious as you will find out about as you read on.

The wonderful hours were spent meditating, wading in the lake, practicing yoga, resting in my hammock, eating slowly, daydreaming, and exploring nature up close. I was excited to discover a fire pit about half way in on the trail that was in a place where people gathered and swam. I immediately thought of bringing my daughter to the spot in a couple of years when she is out of the prancy-dancy walking stage and falling off a cliff is less of a possibility.

I trained with a thirty-plus pound pack for over six months. I hiked on day and overnight trips with it, walked around my neighborhood and local nature trails, and took my daughter to the playground wearing it. A five pound bag of potatoes that my husband needed for dinner one night was missing because it was in my backpack. Strength training all this time changed the way I tackled Hunt Lake on round two.

My endurance was long lasting and my legs didn’t scream in pain. My upper body held sturdy while pulling myself up the near-verticle climbs. I felt powerful and strong like Wonder Woman. Yes, I know you’re not supposed to give yourself a trail name but I did. The rules can be bent when you’re as bad-ass as I am. Victory was mine.

My friend began to struggle on the trail during our way back to the trail head. She nearly had a panic attack when I discovered that we were turned around and heading the wrong direction. We corrected our route and were on the right path in less than ten minutes but she had a downward spiral.

Just like me on Hunt Lake the first time, she was physically and mentally overexerted. We started our hike early but were on the trail during the strong heat of the afternoon. The heat and humidity also wore her down.

I asked her what I could do to help and what she needed. She said, “I need to get out of my head. What do you do when you feel like this?”

The first thing I do is I go to my happy place. My happy place is an island that has volcanoes, but the lava doesn’t burn and is just cool to look at. The water around the island has dolphins that leap through the air. I close my eyes and I visualize myself looking at the island. It is a pretty magical sight to see active volcanoes and dolphins all at once. The sun is always shining in my happy place too.

The next thing I do is I rationalize my thoughts surrounding safety and put together a mental list of who and what is around me that I can use. I assured her that we would not be on the trail in the dark and to put fears further at ease, I told her about the supplies I had if nightfall did come. I wanted her to trust that she was in good hands.

I had an emergency shelter/blanket large enough for two people, a headlamp, a compass, fire starter, GPS, and enough food and water until the morning. There were a lot of people on the trail, boaters in West Hawk Lake, and we had cell phones with decent service. We were and would remain safe.

The third thing I do is break down what needs to be done. I told her that the trail head is too large of a goal to think about. I encouraged her to only focus on each step to ensure her footing was secure before stepping down or up. Hiking Hunt Lake while physically and emotionally drained is dangerous.

For milestone markers, I pointed out spots along the trail, like the wonky looking tree that we saw while hiking in.

She wanted to know how much longer it would take to get to the trail head. I did not have a time estimate but I had a kilometer estimate. I chose not to tell her. It would have done nothing but further mess with her mind. Hiking is 90% mental and negitive thoughts create a downward spiral that sucks out every ounce of light that you have left.

We finished the trail footstep by footstep, keeping her focus on “one foot in front of the other.” 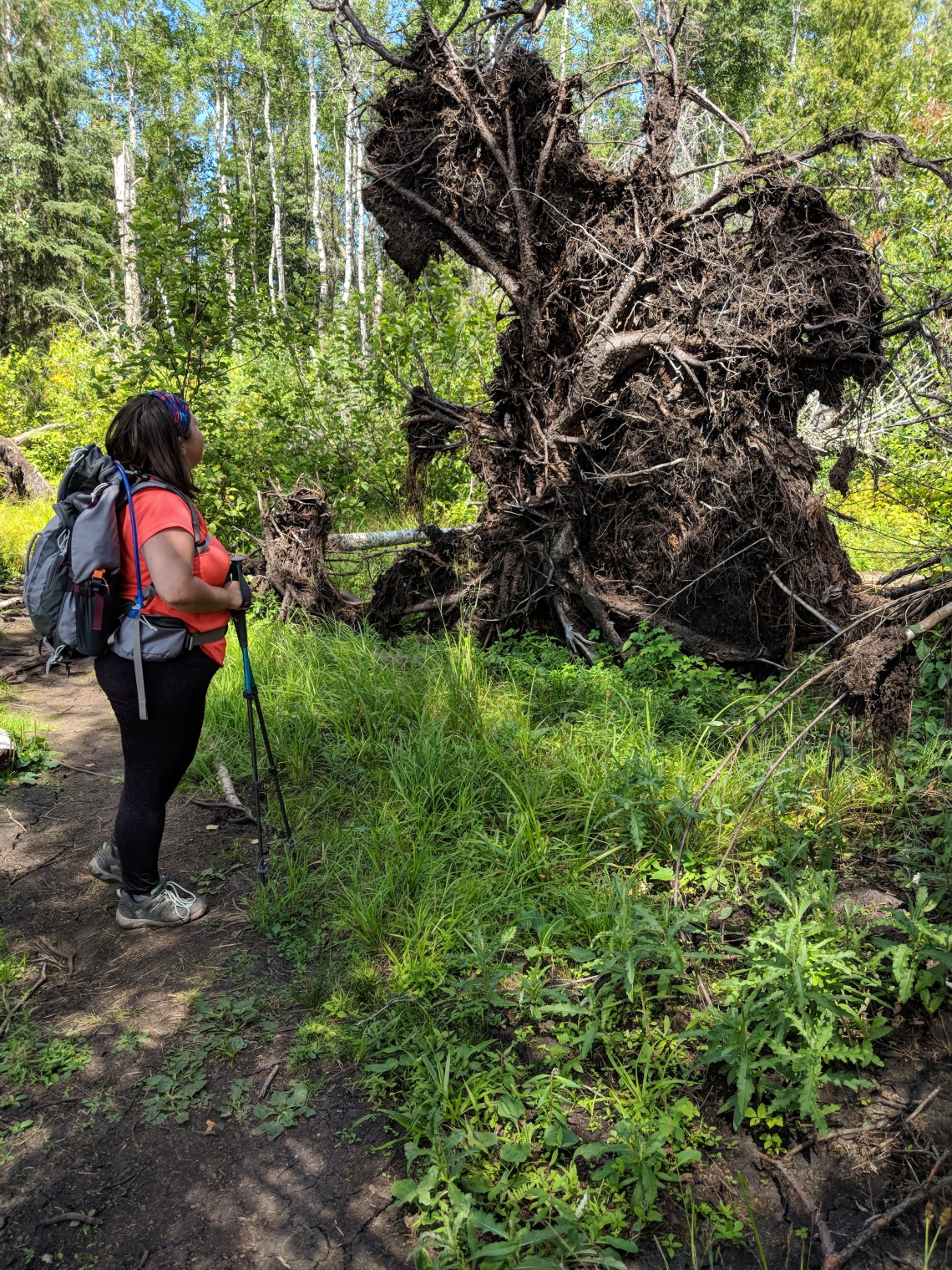 I asked her if she would hike Hunt Lake again. Without missing a beat, she said “yes! The trail broke me down but it built me up stronger!” We have plans to take on the trail again in the fall when the days are cooler.

Do not underestimate what you are capable of, mentally and physically. Rise to the opportunities and challenges to see the potential. Be kind to one another and help people along their journey. Go safely and prepared onto the trail and be open to all the possibilities of growth that await you.

View all posts by thebackpackchroniclesblog